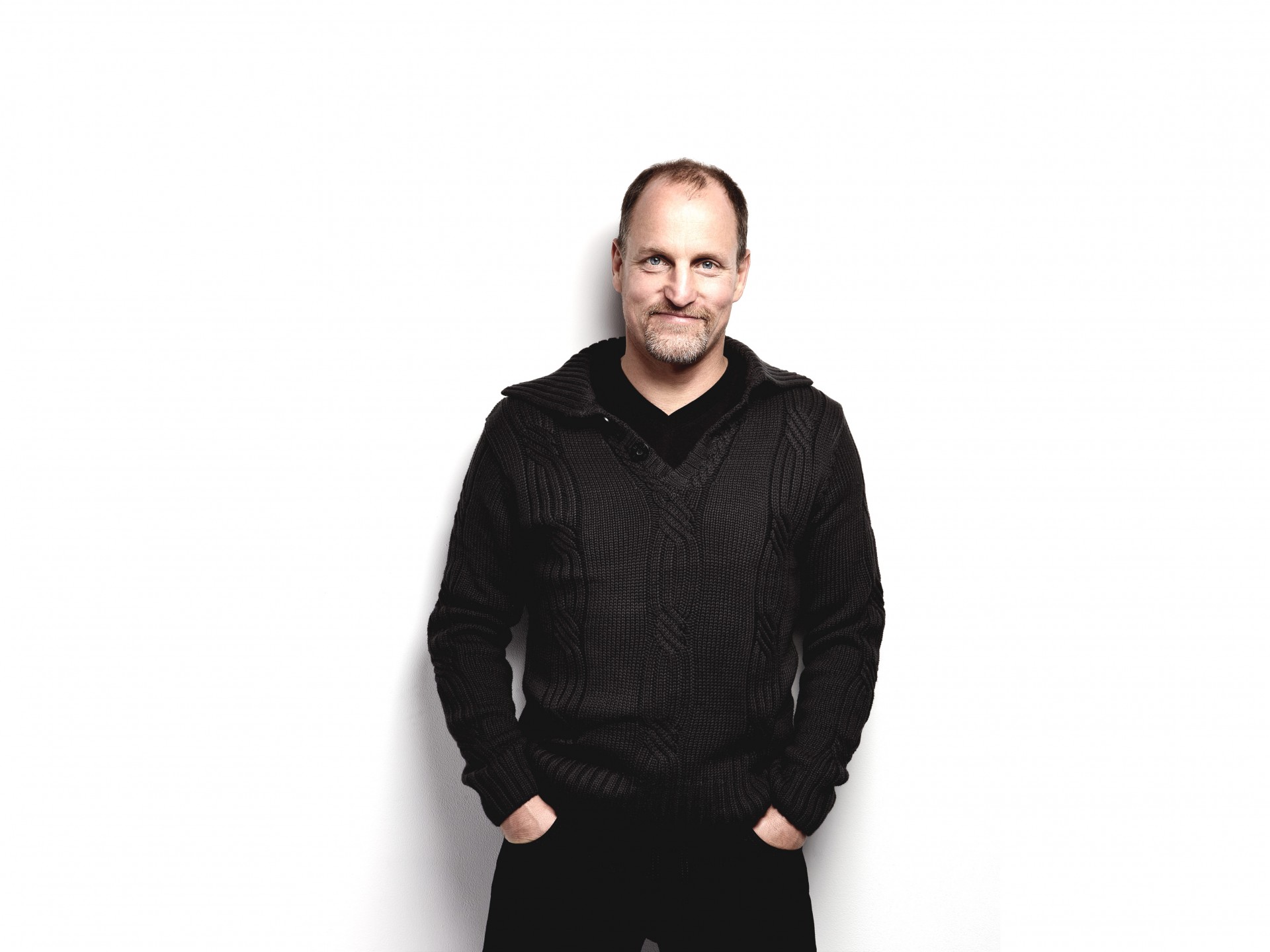 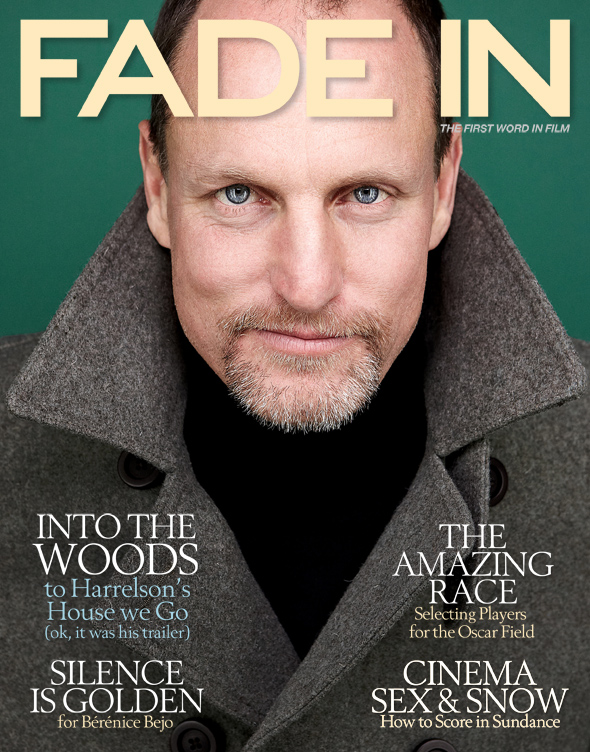 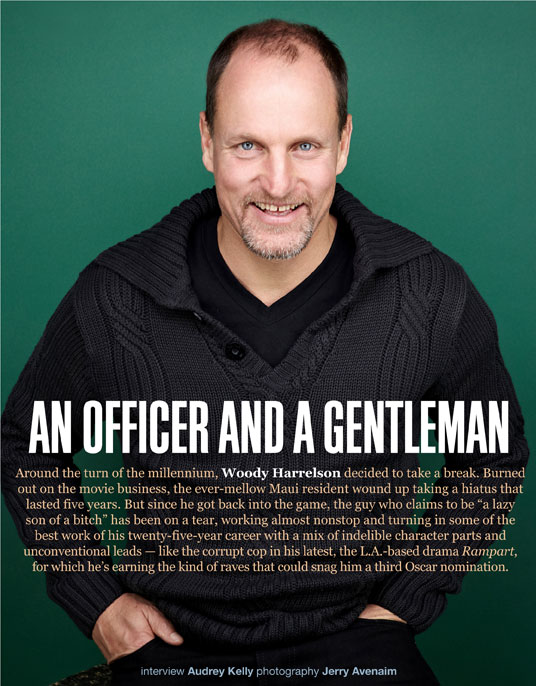 For a guy who says things like “I don’t like working at all,” Woody Harrelson sure works a lot. Sorry, Woody, but no “world-class slacker” (his words again) makes more than forty movies in twenty-five years. But every man has his limits, and even as great a gig as movie stardom can burn a guy out. So, as the late ’90s slid toward the millennium, Harrelson, weary from a consecutive string of projects, decided it was time for some R & R with his wife, Laura, and their three daughters at his beloved slice of paradise in Maui. One thing led to another — and one year led to five — at which point, with a lot more energy and a fresh perspective, he was ready to get back in the game.
Since then he has worked steadily, balancing the leading roles in indies like The Walker and studio films like Zombieland with scene-stealing supporting parts in hits like No Country for Old Men and 2012, and doing some of the best work in a career already marked by knockout performances in films like Natural Born Killers and The People vs. Larry Flynt.
Two of his most compelling turns have come in collaboration with Oren Moverman, the Israeli-born writer-director of the 2009 drama The Messenger, in which Harrelson played a troubled Army sergeant assigned to the Casualty Notification Team, and Rampart, co-written by novelist James Ellroy, in which Harrelson stars as a rule-flouting L.A. cop whose years of blithe corruption finally catch up with him. He scored his second Oscar nomination for The Messenger (the first came in 1997 for The People vs. Larry Flynt), and his raw Rampart performance is generating buzz that could put him back in the running for a third time.
Not bad for a guy who could have settled for a cushy TV career playing endearing dimwits in the mold of Woody Boyd, his character on the classic sitcom Cheers. Instead, he defied typecasting to become one of the most reliable — and reliably unpredictable — movie actors of the past quarter-century.
Yet for some reason, despite the Oscar nods and a resume that includes films by such marquee directors as Adrian Lyne (Indecent Proposal), Oliver Stone (Natural Born Killers), Milos Forman (The People vs. Larry Flynt), Barry Levinson (Wag the Dog), Ron Howard (EDtv), Terrence Malick (The Thin Red Line), Spike Lee (She Hate Me), Robert Altman (A Prairie Home Companion), Paul Schrader (The Walker) and the Coen Brothers (No Country for Old Men), Harrelson remains something of a stealth star — ubiquitous yet overlooked, talented but taken for granted.
But his body of work, and the range of his performances — from the goofy to the poignant to the terrifying — are as impressive as those of anyone in the business. Oliver Stone, who has always been believer, says, “Woody has become one of our most authentic actors. He also happens to have a great social conscience — too bad he can’t afford a political life.”
Looking at the fifty-year-old actor’s upcoming schedule, Stone seems to have a point. In March of 2012, Harrelson will appear in one of the most anticipated films of the year, The Hunger Games, based on the hugely popular young-adult novel by Suzanne Collins, in which he plays Haymitch Abernathy, the drunken mentor to Katniss Everdeen, a contestant in one of the futuristic saga’s death-matches, played by Winter’s Bone’s Jennifer Lawrence. It’s a role that is sure to put Harrelson in high demand.
Before he’s swept up by the adolescent demo that made the Twilight series a global smash, Fade In caught up with Harrelson on the set of Seven Psychopaths, playwright-turned-filmmaker Martin McDonagh’s follow-up to In Bruges, about a dog-napping gone wrong. Relaxed and talkative, Harrelson expounded on his career and recent projects, as well as his frustration with contemporary politics and memorable run-ins with Gloria Steinem and Quentin Tarantino.
One ended in a friendship — the other, not so much.

Mickey Rourke was set to play your character in Seven Psychopaths. How did he fall out and you fall in? Well, it was really lucky for me because he wasn’t content with the deal. He kept pressing on the deal until finally they were like, “Why don’t we go somewhere else?” They started to come to me earlier [than that], and my agent was going to send me the script really quick, but then they were like, “No, no. Everything is fine [with Rourke’s deal]. He’s back in.” That’s when I was in Europe. At the time, although I would have liked to have worked with Martin and this frigging phenomenal cast, I was ready for a break, and just ready to go home. I’d been away from home for a while, so I wasn’t really thinking that much about it. Then I get a “Read this thing urgently!” [Laughs] So I lucked out.
So from the time you read the script to start of production it was…? Two weeks. Martin comes from a stage background.
How is his approach to filmmaking different for you as an actor? Well, one thing that’s pretty major is, he likes it to be word-perfect, as opposed to most films, you can mess around. I like to improvise. He likes it to be just like the theatre, where every word is exactly the same. But I’ve done quite a lot of theatre. I came from theatre. So I can respect that, and I knew, I had heard it. So it’s OK. Although sometimes you really want to just mix it up a little, you know?
I’ve known him a long time. I was actually hanging out with him when he was writing [the play] The Pillowman. He would tell me some of the stuff that was going on, and I’d just be like, [feigns surprise]. I tried to convince him to go with John Crowley as a director, and he did. Then he offered me Pillowman. I read it, and went, “Dude, the darkness has finally outshone the light on this one.” It really was so dark. So I go see it in New York. One of the best productions I’ve ever seen. I was so disappointed in myself for not taking the part. That’s why when this was offered, I took it seriously. I’m not going to make the same fuck-up twice, and go see this movie and say, “Why didn’t I do it?”
A lot of people probably don’t know that you write, direct, produce and star in plays. Yeah, well, I’m finally getting on it. But this play we did earlier this year in Toronto — that was a great experience. So more of that. I’m trying to find the perfect hole in my schedule next year to do one in New York by September. It’s called Bullet for Adolf. [Laughs] The title will let you know what you’re in for…not in terms of Adolf — he doesn’t appear — but it will challenge you.

“In a way, I feel like my character [in Rampart] would have gone Mafia if he hadn’t gone bad cop. He probably has a lot of respect for certain Mafia figures, like Mickey Cohen. So the clothes were modeled after Dean Martin, and even the drink that I got in the film was Martin’s drink. He’d have a gin martini with two olives.” 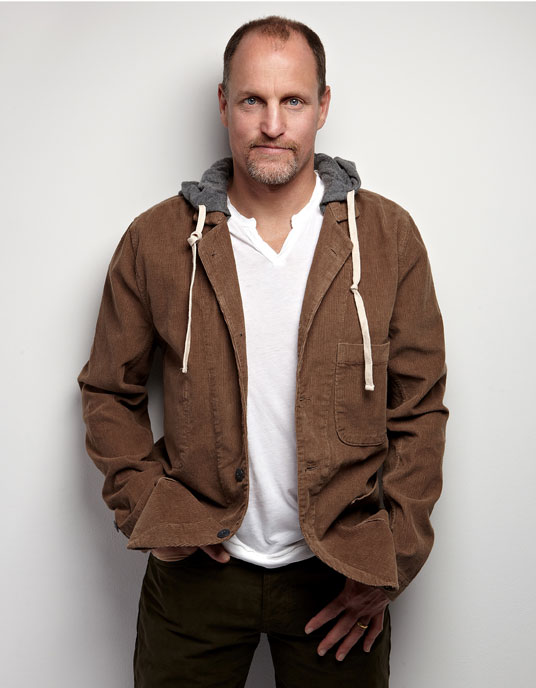 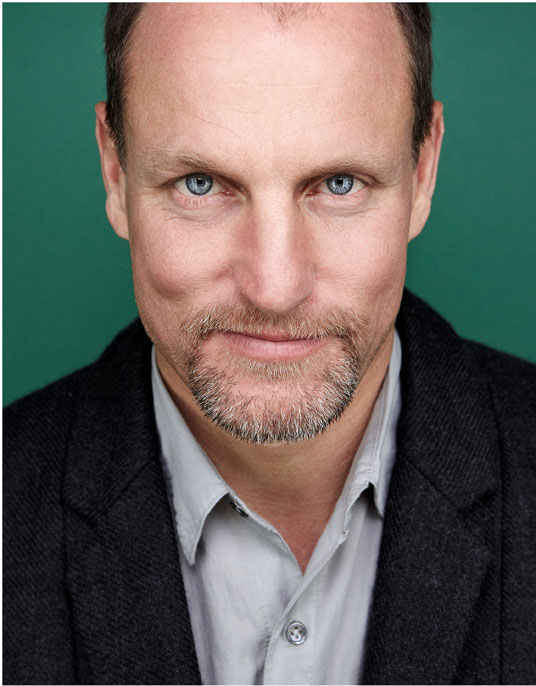 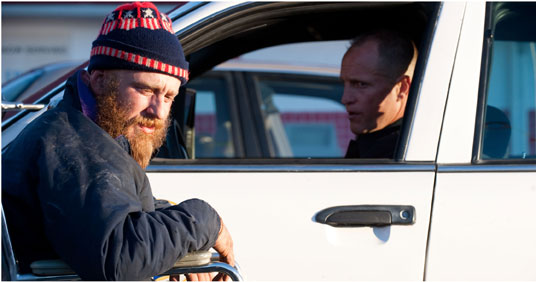 “I always know when there’s been a school shooting. I’ll see them play a scene from Natural Born Killers on the news. And I’m always like, ‘Oh boy.’ Then they’re talking about violence in the media. Of course, they don’t show any images of antidepressants and people don’t widely know that without exception every one of those kids involved in those school shootings are on antidepressants.”

“But ironic that a woman like Gloria Steinem, who used to give names to the FBI of anti-war people… She was this person who was so revered and she could hang out with anybody and they’d be glad to be hanging out with her and think she’d be on their side. No, she’s giving names to the FBI. She’s a lonely women.” 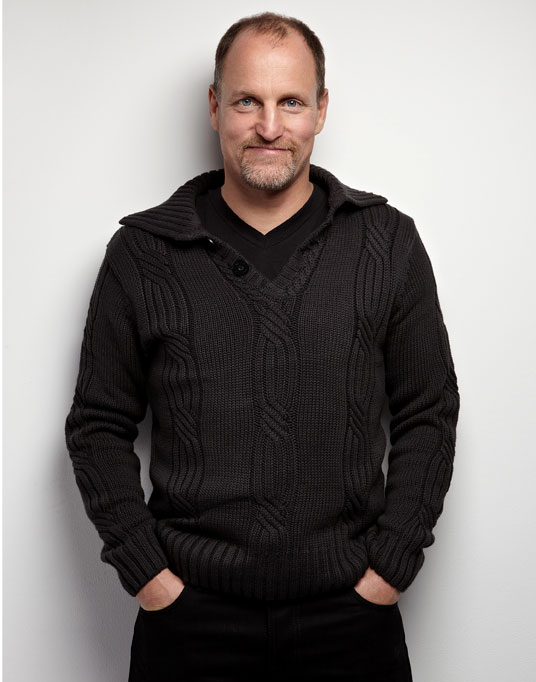 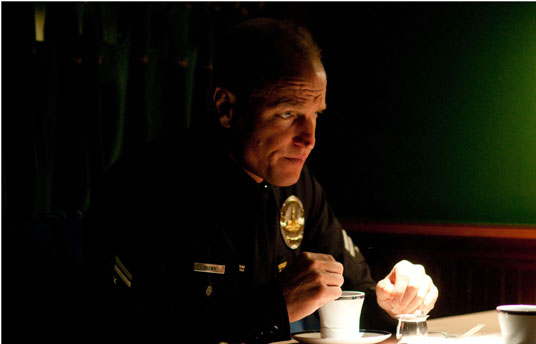 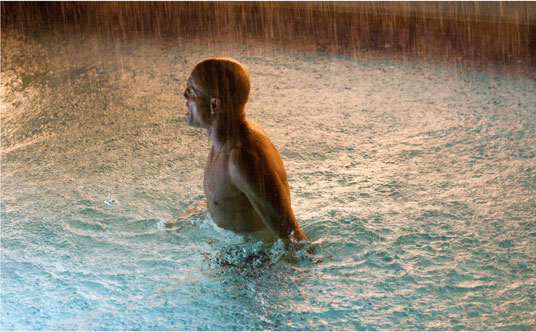 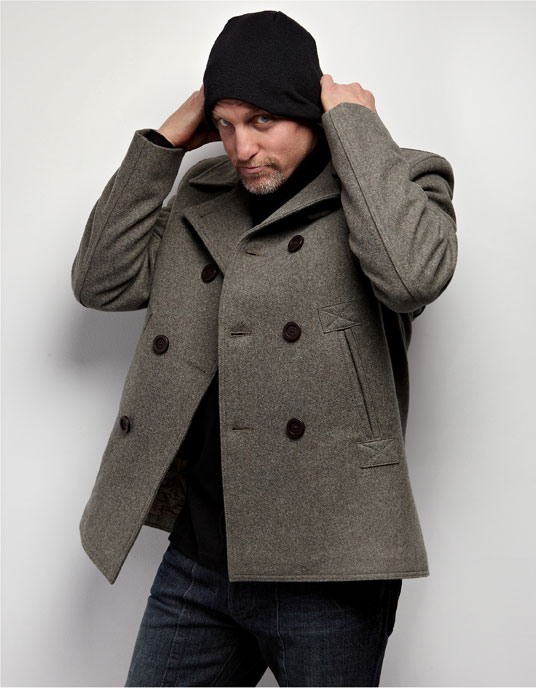 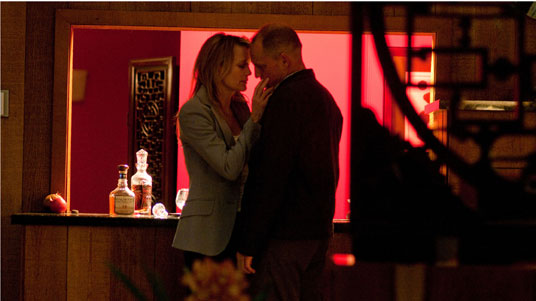 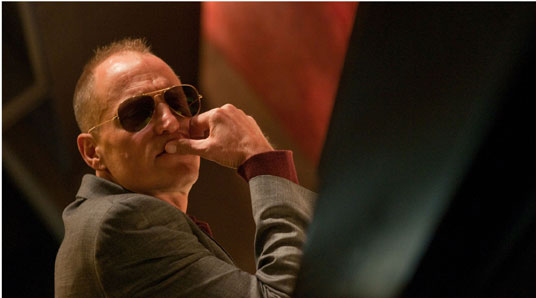 “I don’t know how to be unconditionally loving. We judge. It’s so hard not to judge. I remember Gandhi being quoted as having said that he hasn’t hated any man for twenty-five years. I thought, ‘Wow. Wow!’ I just think of some corrupt judges I’ve seen do the most corrupt shit in court. I hate them. I can’t imagine what’s going to turn me around.” 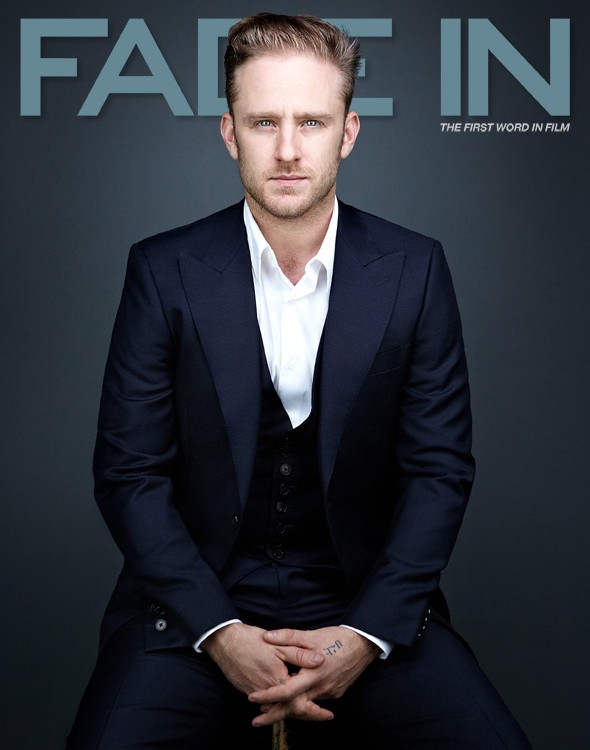 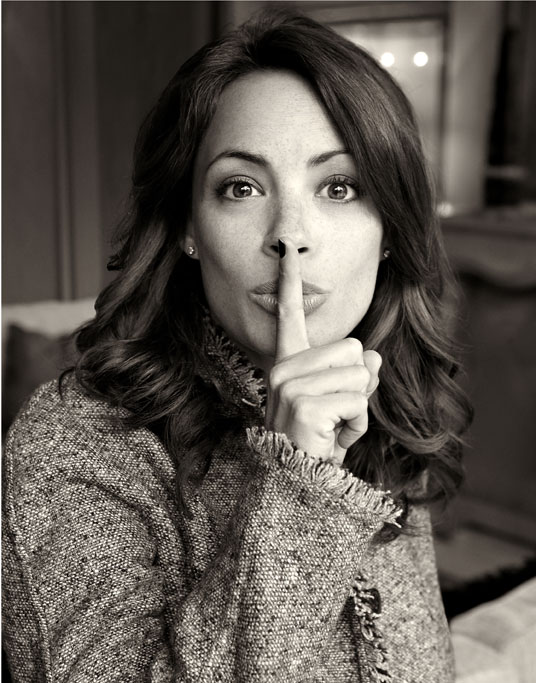